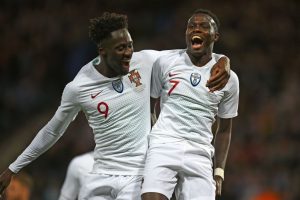 FULL TIME | Scotland 1-3 Portugal. Steven Naismith’s goal proves to be the last touch of the match, but just a consolation for Scotland, as goals from Costa, Eder and Bruma give Portugal the win in this International Friendly. Thank you for your support. #SCOPOR pic.twitter.com/GTFua1AwOa

Sunday night International at Hampden Park … Scotland ??????? 1 Portugal ?? 3. Pretty tight 1st half but the European Champions scored just before half time and added 2 more after. Naismith with an injury time consolation for Scotland. Crowd 19,684. pic.twitter.com/3fvXewpIrE

A goal from Wolves winger Helder Costa on his international debut set Portugal on their way to a comfortable 3-1 victory over Alex McLeish’s side!

Well thats #russia and #portugal with wins for me. Not overly confident about #italy but thats why its called gambling right…

4 wins- 3 of those were vs Iraq, Singapore and Guatemala.
2 draws
4 defeats

Clear to see who has it worse internationally.

Portugal continue to prove there is life without Cristiano Ronaldo after extending their good form with a comfortable win in Scotland | @RichJolly | https://t.co/wAOrgPuo5t pic.twitter.com/3i570yWLLC

Solid showing by an experimental team and comfortable win for #Portugal in low-intensity friendly. Slow start, but better in 2nd half when Renato + Gedson came in and improved the midfield. First Seleção goals for Hélder Costa + Bruma.#TudoPorPortugal ?? pic.twitter.com/P4WzmIWZNi

For more updates about Portugal Vs Scotland keep visiting allsportspk