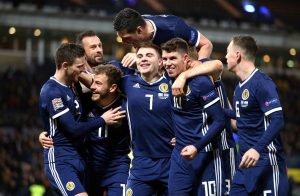 You’d need to be buckin Mastermind to understand all the various permutations of Scotland’s #NationsLeague victory against Israel. Well done though to #Scotland on a fantastic victory…whatever it means #SCOISR

You’d need to be buckin Mastermind to understand all the various permutations of Scotland’s #NationsLeague victory against Israel. Well done though to #Scotland on a fantastic victory…whatever it means #SCOISR

Forrest treble sends Scots to play-offs James Forrest scored a stunning hat-trick as Scotland came from behind to beat Israel in a thrilling match at Hampden Park, and confirm Nations League promotion along with a playoff spot for Euro 2020. https://t.co/KWY9Yj3bhM

Scotland have earned a Euro 2020 play-off spot with that great 3-2 win over Israel.

To clear things up, they now have to face other winners of League C in a semi-final and final, beat them, then they make it.

So, they’re basically two games away from qualifying. ????????? pic.twitter.com/mslDiKp9pv

Massively relieved by @ScotlandNT holding out for the 3-2 win over Israel. A great performance & securing @EURO2020 play off spot is huge. It was nothing to do with tactics though – it was all down to Callum Paterson’s lucky tache! #Scotland pic.twitter.com/Ui1TxxvmR4

Scotland win and are promoted in a exiting game up in Glasgow! With James Forrest grabbing himself a hat trick
??????? Scotland 3-2 Israel ??

And wales lose by one goal out in Albania! Really poor result for Ryan Giggs’s men!
?? Albania 1-0 Wales ???????#SCOISR #ALBWAL

“…its all over here at Hampden and for the second time Celtic fans have supported Scotland, they’ve final beaten Israel and one of their own has scored a hat trick. What is the republican wording for staunch, Jeff?”

Italian Serie A ’18-19 – Highlights: Quagliarella Overtakes Ronaldo As The Highest...