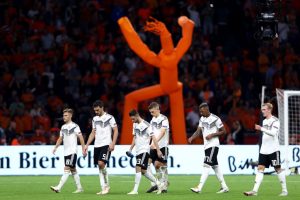 3 – The Netherlands have beaten Germany with a 3+ goal margin for the first time in history. Historic. pic.twitter.com/rDscgOKO64

Germany have failed to score in three consecutive competitive matches:

The first time it has ever happened in their history. ? pic.twitter.com/bOJ8Wc80Lz

4 – Denzel Dumfries made more tackles (4), recoveries (6) and clearances (5) than any other player in the first half of Netherlands – Germany, while also winning the most duels (7). Introduction. pic.twitter.com/E79UAtR5oU

Things go from back to worse for Germany, who have now failed to score in four of their last five competitive internationals and are beaten by goals from Van Dijk, Memphis and Wijnaldum.