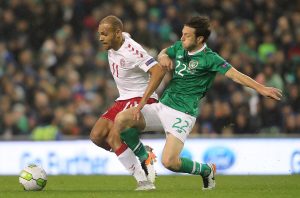 Republic of Ireland picked up their first point in the UEFA Nations League after holding Denmark to a goalless draw at the Aviva Stadium in Dublin on Saturday night. pic.twitter.com/gTxK6DgXN8

It’s over at the Aviva as Ireland and Denmark draw 0-0 in a dour game. No game time for Seani Maguire either! We have the players to at least play some football! Would someone please tell Martin O’Neill and Roy Keane to bow out graciously!! #timesup #COYBIG

Great to see @mattdoherty20 make his first competitive @faireland start & play the 90 minutes in 0-0 draw vs Denmark in UEFA Nations League. Here’s to more of the same vs Wales on Tuesday ?⚽️?? (? Sportsfile) pic.twitter.com/FGWgg4ooyA

Ireland and Denmark have met 15 times with 5 wins for Ireland, 6 draws and 4 losses. 13 of the games were in competitive matches – 11 in FIFA World Cup qualifiers and 2 in European Championships qualifying games.

A crucial goalline clearance from Harry Arter helped the Republic of Ireland get their UEFA Nations League campaign up and running with a uninspiring 0-0 draw against Denmark. The Cardiff midfielder made his return after declaring himself unavailable.. https://t.co/juTUlDILGU