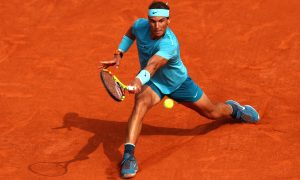 BREAKING: Rafael Nadal has won the #FrenchOpen for the 11th time! The world No. 1 defeated Dominic Thiem, 6-4, 6-3, 6-2, and remains undefeated when playing in #RolandGarros finals. #RG18 pic.twitter.com/EtltEpRLH5

“It’s a dream to be here with this trophy again.”

It’s obvious how special this tournament is to Nadal.