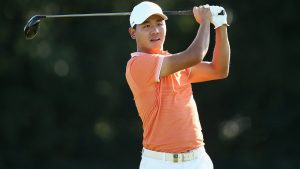 In Thursday’s opening round, Wu Ashun stormed into a one-shot lead at the ongoing KLM Open with a dazzling seven-under-par 64.

After arriving in the Netherlands on the back of a top-10 finish in Switzerland, the 33-year-old continued his fine form with a bogey-free round at The Dutch. Birdies at the 4th and 8th holes, saw Wu achieve the turn at two under and five further gains between the twelfth and eighteenth saw him take a one-stroke lead from Chris Wood.

Englishman Wood additionally turned in a faultless card, three birdies each on the front and back nine helping him to a score of six under.

Wu Ashun will take a one-shot lead into the second round of the KLM Open after firing a bogey-free 64 on day one at The Dutch. The Chinese arrived in Spijk off the back of… European Tour RSS Channel | European Tour Latest News https://t.co/l3Cpr0N1st #pga #sports

Eddie Pepperell may have passed up on his selection in the upcoming Ryder Cup, however he is one of 13 players tied for 3rd in what is a congested leaderboard.

Meanwhile, the vice-captains of Ryder Cup, Lee Westwood and Padraig Harrington are four shots off the lead in the wake of opening with rounds of 68.

Wu Ashun KLM Open leader after day one – https://t.co/W36Bwn1FHZ
Wu Ashun hit a bogey-free 64 on his way to the clubhouse lead at seven-under par after the first day of action at the KLM Open.Wu, a two-time winner on the European Tour, hit birdies on the 12th, 13th, 14th and…