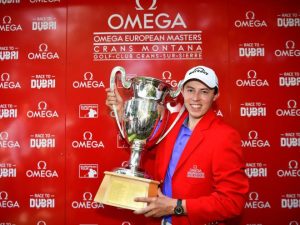 Britain’s Matthew Fitzpatrick successfully defended his title by asserting a 5th European Tour win, in the wake of pushing out Denmark’s Lucas Bjerregaard in a play-off during the Omega Masters in Switzerland.

Since Seve Ballesteros in 1978, Fitzpatrick turned into the 1st player to effectively protect the title at Crans-sur-Sierre Golf Club.

Ryan Fox and Josh Geary have completed another steady week on the European Tour overnight at the Omega European Masters.

Fox ended his first week back on the European Tour in T30, while Geary finished T66.

After completing level with Bjerregaard at 17 under, the 24-year-old, Fitzpatrick birdied the principal play-off hole after 72 holes. Fitzpatrick shot a birdie at the last for a 67, as Bjerregaard checked a last cycle seven-under 63.

Matt Fitzpatrick’s consolation for missing out on the Ryder Cup? A repeat win at the Omega European Masters. Fitzpatrick birdied No. 18 to get into a playoff, and then subsequently birdied it again to secure a victory. ⛳️ pic.twitter.com/8JFczfK4st

In the wake of carding a bogey-free third round of seven-under 63, the world number 44 had entered the last round with a two-shot lead over Lorenzo-Vera.

“I don’t hold anything against Thomas Bjorn for not picking me” … Matt Fitzpatrick missed out on the Ryder Cup, but he was soon celebrating back-to-back victories at the Omega European Masters. https://t.co/EnMqArrK4S pic.twitter.com/dhKrV1RFi0

Fitzpatrick: No beef with Bjorn: Matt Fitzpatrick maintained his view that his form this season did not merit a Ryder Cup place as he reflected on emulating the late, great Seve Ballesteros at the Omega European Masters. https://t.co/vLVkU5vGwP pic.twitter.com/9nH7LTu50A