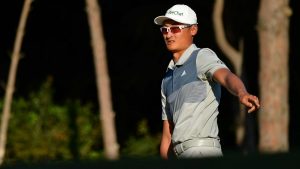 On day 3 at the Turkish Airlines Open, China’s Li Haotong hit five birdies on the front nine to take a 3-shot lead over Justin Rose and France’s Alexander Levy.

Rose, who can return to the highest point of the world rankings with triumph on Sunday, had a two-shot overnight lead.

“I really want to win this week and play my best tomorrow. Especially at a Rolex Series event. It’s going to be an exciting day tomorrow and I’m looking forward to going against @JustinRose99,” #LiHaotong said #TurkishAirlinesOpen | by @SwingGolfSwamy https://t.co/nMHc02B6NQ

Notwithstanding, the Englishman just dealt with a two-under-par 69 in his 3rd round.

Li, 23, likewise eagled the tenth hole and birdied the twelfth to complete with an eight-under 63.

#TurkishAirinesOpen Li Haotong will take a 3 shot lead heading into the final round of the Turkish Open after carding 8 under in the 3rd for an overall score of 17 under par.

Thomas Aiken is the best placed South African on 11 under par in a tie for 7th.

Meanwhile, Alexander Levy took advantage of the low-scoring conditions at Regnum Carya Golf and Spa Resort to card a 66 and offer 2nd spot with ruling boss Rose, one shot clear of the 2016 boss Thorbjorn Olesen of Denmark.

Also, England’s Danny Willet and Sam Horsfield are five shots back on 12 under with Tommy Fleetwood, Li’s playing accomplice on day 3, on 11 under.

@JustinRose99 put 3 balls in the water and had a 3-putt on the par 5, 7th to shoot a 69 (-2) for the 3rd rd. of the #TurkishAirlinesOpen. Now 3 shots behind Li Haotong, Rose was 2 back last year in Turkey, but stormed from behind to notch the victory at the @regnumcarya course pic.twitter.com/olKGR42iEG