This is the first match of Serie A, Match Day 6 of 38. The highlights are appended below the points table.

Serie A – Match 1 of 10: Inter Milan vs Fiorentina 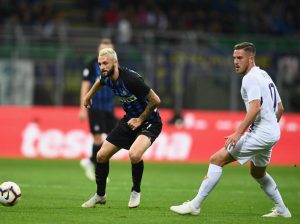 Inter Milan climbed to 5th on the table after a 2-1 win over Fiorentina, thanks to goals by Mauro Icardi & Danilo D’Ambrosio #SSFootball

Not terribly pretty but #Inter are squeezing out victories now. There is still a staggering to our game, as if all the parts are not quite well oiled or coordinated enough yet. #InterFiorentina

Just post that Inter are lucky to get yer daily retweets, 3rd win in a row in last 15 minutes… They keep the focus till the last minute.. This is all I’m asking from Milan, don’t just play one half or 60-70 minute and then come moaning at FT that you were better for most parts.

How does this Inter Milan team win games?? ?