Home Inside Bridge KBA – 1st Dr. Essa Bridge Tournament: Data Steel Wins
Facebook
Twitter
Pinterest
WhatsApp
The  Dr. Essa Lab. Trophy and Cash Prize of Rs. 20,000 was won by Data Steel by edging past Bilal with a score of 84.14 out of 120. Bilal who after leading by almost a match ahead half way after 3 Rounds had to console themselves with the Runners up position at 80.96,to take the Runners up Cash Prize of Rs 15,000.
The Decisive Board was the last of the Tournament when instead of going down in the ambitiously bid contract of 4H by the ever aggressive Major Zaidi of Data Steel playing with the sly and calculating Shakeel Chandna made the otherwise doomed Contract on Defence blunder. Data Steel comprised of Tariq and Hassan Rasheed, Man Zaidi and Shakeel Chandna along with the top rated anchor pair of Javed Miran and Tahir Masood while Bilal had the services of Gulzar Bilal and Farukh Liaqat playing with the Lone Ranger Pair of (Abdul Muqeet)and Wajahat Suri, further strengthened by the inclusion of Life Master Shaheen Iqbal.
Playing reasonably well was the Team Kings with their star player, Hussain Jafar playing with Asghar Abbas, and including Ali Ahmad, Shahab and Ghufran with a score of 73.21. Followed by the team Farhat comprising of champion pair of Anwer Kizilbash & Anis ur Rehman with Ghaffar Qureshi & Naseem Arzoo at  a score of 70.92, to win the last 2 cash prizes of Rs. 10,000 and Rs. 5, 000.
The First Dr ESSA Lab. Bridge Tournament of 16 Board Six Rounds was contested by 10 Teams. 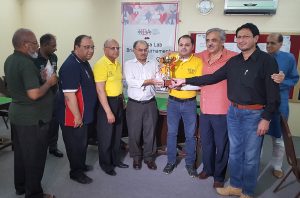 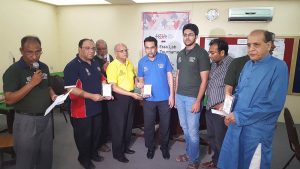 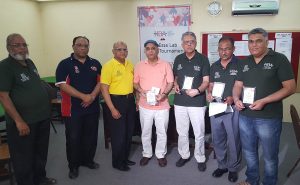 The KBA Management in order to promote bridge especially among the young Pakistanis organizes weekly events in venues which include Karachi Gymkhana, Karachi Club, Defence Club or Golf Club or at Aslam Hall.