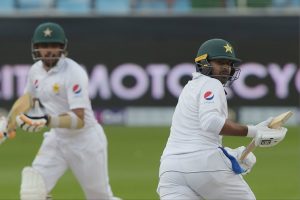 Haris Sohail continued from where he left off and reached his maiden test century. He was followed by Babar Azam who also reached his maiden hundred, as Pakistan declared on 418/5. New Zealand made a solid start, as their openers defied Pakistan’s bowlers and ended the day on 24/0.

And that’s the Pakistan declaration! 418/5. little bit of excitement at the end of day 2. Tune in on https://t.co/0c2QOWpPDT or https://t.co/u6qAsCcjqH if you’d like to listen to us cover the beginning of New Zealand’s innings this evening. #PAKvsNZ

At Stumps on Day 2, New Zealand began their chase with Jeet Raval and Tom Latham after Pakistan declared at 418/5. The openers survived the Pakistan bowling slew and will be back tomorrow to stack up the runs. The Kiwis now trail by 394 runs. #PAKvNZ pic.twitter.com/shessv7f9U

Just one wicket fell on an attritional second day between Pakistan and New Zealand, as Haris Sohail and Babar Azam, who made his first Test hundred, batted their side into a position of strength.#PAKvNZ REPORT ?https://t.co/xoQJNSYey8 pic.twitter.com/IYZODlLDWr

What a session for Pakistan!

They are yet to lose a wicket all day, and are 356/4 at Tea on Day Two against New Zealand.

Haris Sohail is 143*, while Babar Azam is just one run away from his first Test match hundred. Will he get there?#PAKvNZ LIVE ⬇️https://t.co/sHrmQnbNyn pic.twitter.com/RVSvTJT1tB