This is the next two matches of the Premier League, Match Day 13 of 38. The highlights are appended below the points table.

Match 8 of 10: Bournemouth vs Arsenal 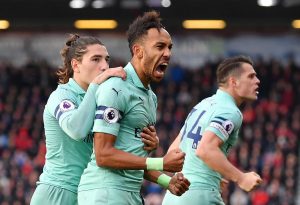 Arsenal’s away record in the 2017/18 Premier League season:

Arsenal’s away record in the 2018/19 Premier League season:

4 – Arsenal have won as many away games in the Premier League this season (4/6) as they managed in the entirety of last season’s campaign (4/19). Attitude. #BOUARS pic.twitter.com/zjdhvHq2Zo

The Gunners build a five-point gap from sixth with a return to winning ways. Unai Emery’s men have now scored more goals away from home than any other Premier League team (16).

2 – Arsenal are one of only two teams still yet to lead at half time in a Premier League game this term (alongside Cardiff), failing to do so since the final day of last season (1-0 v Huddersfield). Issue. #BOUARS pic.twitter.com/h5tilfTRaL

Arsenal extended their unbeaten run to 17 matches across all competitions as Pierre-Emerick Aubameyang secured a 2-1 victory at gutsy Bournemouth in the Premier League on Sunday. pic.twitter.com/BqGiD03TXi

Arsenal get their first win after three draws in a row. Aaron Mooy becomes the first Huddersfield players to score a brace since himself in December 2017. pic.twitter.com/a6ilAiPMMo

.@Arsenal have won as many away games in the #PremierLeague this season (4/6) as they managed in the entirety of last season’s campaign (4/19) #BOUARS pic.twitter.com/MyDlvwDaSW

Match 9 of 10: Wolves vs Huddersfield 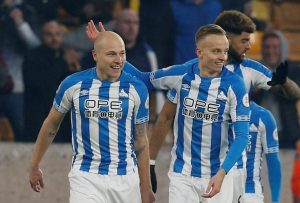 Aaron Mooy scored a stunning brace to help Huddersfield beat Wolves and lift them off the bottom of the Premier League table to 14th https://t.co/ZWImnV3KXf pic.twitter.com/LDtVGlTSkD

What a fantastic performance by Huddersfield Town against a very good Wolves side. So proud of the Terriers, every player was massive. WE ARE PREMIER LEAGUE #htafc

Wolves’ 1st half performance today was probably the worst half of football I’ve seen from a Premier League team so far this season – And I support Crystal Palace ??? #WOLHUD #SuperSunday

Wolves HAVE to be the most annoying side to watch in the premier league. When we’re bad, we’re woeful and when we dominate we just can’t score.

WHAT A WIN!@AaronMooy‘s superb brace seals a fantastic three points for the Terriers, who are now up to 14th in the @premierleague table! #WOLHUD (DTS)

So last weekend @Wolves almost won @Arsenal at Emirates.
This weekend Wolves has just beaten at home by a bottom @htafcdotcom !!
No One Is Safe @premierleague