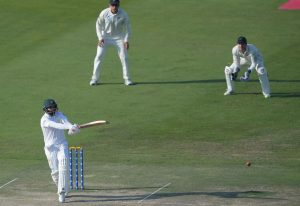 Bilal Asif displayed excellent grit and composure by taking 4 wickets on Day 2 and completing his five wicket haul in the first innings to bowl out New Zealand on 274. In reply, New Zealand’s strike bowler Boult struck twice, to limit Pakistan 2/17, however resistance from Haris and especially Azhar Ali brought Pakistan back into the match.

Depends how they play tommorow….pakistan needs to paly with good pace and atleast get the lead of 100 and put new zealand under pressure #PAKvNZ

Mohammad Hafeez is set to retire from Test cricket at the end of the ongoing Test match between Pakistan and New Zealand in Abu Dhabi.

REPORT: Day two of the deciding third Test between Pakistan and New Zealand was a slow, drawn-out affair as New Zealand fought back to keep the match on an even keel in Abu Dhabi. #PAKvNZ

The third Test between Pakistan and New Zealand is evenly poised going into the third day.

Which team do you think is ahead?

Pakistan reach 139/3 at the close of play, 135 runs behind New Zealand in the deciding Test of the series.