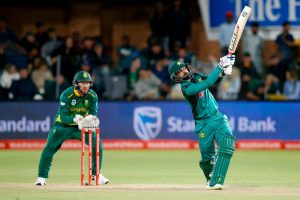 Hashim Amla scored his 27th ODI ton, and helped South Africa put 266 runs on the board, in what appeared to be a slow pitch.

However, the bearded South African’s century went futile as Mohammad Hafeez played a splendid innings to take Pakistan to a success in the first ODI against South Africa by five wickets on Saturday.

Hafeez struck two sixes and eight fours in his 71 from only 63 balls after Imam ul Haq’s 86 in their 267-run stand. Babar Azam likewise contributed 49 runs.

Man Of The Match: Mohammad Hafeez

Pakistan vs South Africa in Last 6 ODIs against each other:

For his 71* off 63 deliveries, Mohammad Hafeez is Player of the Match. What a performance from the 38-year-old!#SAvPAK pic.twitter.com/Ju5M7HO3cb

Hashim Amla finishes on 108*, while debutant Rassie van der Dussen made an excellent 93.