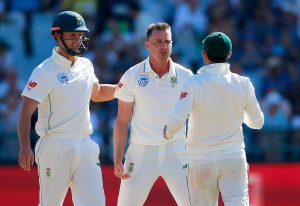 South Africa’s pace attack took their squad to the verge of another Test series win, as Pakistan was all out for 294 at the end of Day 3 of the 2nd Test on Saturday, leaving the Proteas requiring only 41 runs for triumph on Sunday.

Dale Steyn took 4-85, as three of Pakistan’s batsmen put on 73 runs to forestall South Africa dominance. And, it was South Africa’s spearhead, Kagiso Rabada who had the best bowling figures of 4-61. Prior in the day, South Africa were all out out for 431 as they took a monstrous lead of 254 runs.

Before dismissing @asadshafiq1986 as ‘mediocre’ or ‘good-for-nothing’ player, recall his 137 against #Australia in #Brisbane when he almost single handedly took Pakistan home; 111 & 88 against #SouthAfrica in #CapeTown; 109 against #England at The #Oval. Has 12 test tons. Respect https://t.co/F7jZjAIuAG