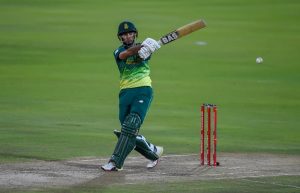 The rain poured in favour of the South Africans, as they won the match by only 13 runs to take the lead in the series by 2-1.

Pakistan had won the toss and elected to bat first. Imam-ul-Haq, who had been under a lot of pressure scored a magnificent century followed by Babar Azam and Mohammad Hafeez who scored half centuries to stabilize Pakistan’s innings. Cameos from Shoaib Malik and Imad Wasim ensured Pakistan posted a massive total of 317 runs on the board.

In reply, Proteas started off brilliantly with a 50-run partnership between the openers, De Kock and Amla. After Pakistan got rid of the opening pair, it was Hendricks and Du Plessis who resisted Pakistan’s bowling attack, until rain came down and the match was forced to a D/L result.

Man Of The Match: Reeza Hendricks

Reeza Hendricks was unbeaten on 83 as the Proteas defeated Pakistan by 13 runs based on the D/L method ?

Pakistan will head into the pink ODI on Sunday knowing a loss would give South Africa a series victory ????#SSCricket pic.twitter.com/xLxDrNVfLy

South Africa win under D/L method with a 13 runs margin. Sarfraz and company will now have to work harder. Imam’s century will take pressure of him. Babar Azam’s bat sounded beautiful. The series gets more exciting. #SAvPAK

Unfortunate For #Pakistan, They Have Been at the Wrong Side of Luck, Even the Whole Tour So Far ? #SouthAfrica Won by 13 Runs (D/L Method) ??#SAvPAK ?

Nobody wanted a D/L result but for once South Africa have played it well and were looking good on 187/2/33 with Reeza 83* (90) and Faf 40* (42). Pakistan might have turned the screws but they were at the same ground. SA take a 2-1 lead in the series. #SAvPAK via @ESPNcricinfo