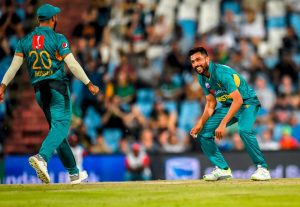 Pakistan squeezed out a relief win by 27 runs after beating South Africa in the third and last T20I at the SuperSport Park in Centurion on Wednesday. Pursuing 169, South Africa were never in the match and in spite of a fine fifty by Chris Morris (55 not out) the hosts missed the mark concerning the target. Mohammad Amir was the pick of the bowlers with figures of 3/27.

Put into bat Pakistan set up a focused score of 169/8 of every 20 overs. The guests got off to a decent beginning, however neglected to exploit it and continued losing wickets at ordinary interims. Shadab Khan’s late appearance fueled his group to a decent score. Protecting the target, every one of the bowlers contributed well to win the match.

Man Of The Match: Shadab Khan

Alhamdullilah! Pakistan end it’s tour by having a sensational win against South Africa in 3rd T20??. Either you win or lose we are with you❤️
Pakistan Zindabad??#SAvPAK pic.twitter.com/NzNnEStwQe

South Africa won the toss and elected to bowl first