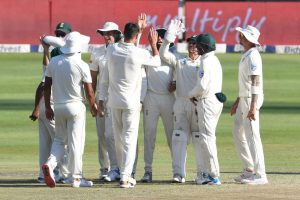 South Africa proceeded with their predominance over Pakistan, as after winning the initial Two Tests, they replicated their performance to beat Pakistan by 107 runs in the 3rd and final Test of this series. Beginning the day at 153/3, Pakistan continued losing wickets at regular  interims and they were knocked down some pins out for 273 in the main session of the day.

Duanne Olivier struck twice in two deliveries as the sent Babar Azam and Sarfraz Ahmed to the pavilion and this gave South Africa a huge advantage over Pakistan. Asad Shafiq was the most noteworthy scorer among the Pakistani batsmen, however he was dismissed on 65 runs by Vernon Philander. The last three wickets were taken by the Proteas pacer Kagiso Rabada, as South Africa marked a solid win.

Pakistan are all out for 273, congratulations South Africa on the 107-run victory and the series white wash 3-0 You BEAUTIES! Fantastic knock by decoke good bowling by d.olivear player of the series congratulations boys &team???#ProteaFire #SAvPAK pic.twitter.com/ZwGX1YlUUH

It’s 3-0 to South Africa in the test series and yet another struggle for a visiting team, this time it was Pakistan. Struggle to say the very least.#SAvPAK

What is more important in cricket Heart or Mind ??? The answer of why Pakistan lost to South Africa in the Test series is in this question .. How long are we going to cry over the retirement of Younis and Misbah #WorryingTime Fix and Respect first class cricket..