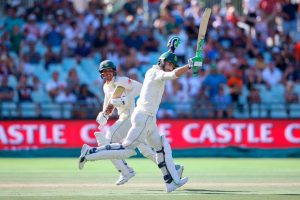 On Day 2 of the second Test against Pakistan, Faf du Plessis and Temba Bavuma guaranteed South Africa took an ordering lead of  205 runs. Having endured the early tempest of losing two wickets, Faf and Bavuma batted calmly and made Pakistan buckle down.

A wicketless second session just added to Pakistan’s inconveniences. While Bavuma succumbed to 75, Faf proceeded to score 103 preceding being given out. Shaheen Afridi took the two wickets.

Quinton de Kock included kept running effortlessly at the opposite end to lead the pack past 200 runs. Post the Tea session, the ball would hop up sporadically which would energize the host seamers to take care of business on Day 3.

Pakistan need to indicate a lot of purpose going ahead on the off chance that they are to abstain from losing this by an innings edge.

A century from captain Faf du Plessis, backed up by fifties from Quinton de Kock and Temba Bavuma, mean they reach stumps leading by 205 with four wickets in hand.#SAvPAK SCORE ➡️ https://t.co/sT3TAzx0C3 pic.twitter.com/ZXcbb21ph4

Pakistan’s tail crumbles as Duanne Olivier (4/48) and Dale Steyn (3/48) tear through the visitors – all out for 177 at tea in Cape Town. How good were the South Africa pacers?#SAvPAK pic.twitter.com/rXdZMkAOQP

‘Faf Du Plessis bounced back off a pair with a classic hundred to put South Africa way ahead of Pakistan. #SAvPak