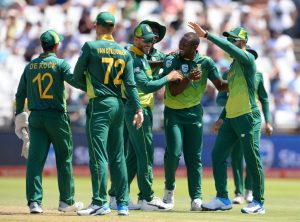 South Africa won the fifth and last ODI by seven wickets against Pakistan on Wednesday to secure the five-coordinate ODI arrangement by an edge of 3-2. Pursuing a precarious total of 241, the Proteas got off to a relentless beginning, however lost Amla early in the race.

Be that as it may, from consequently it was the Quinton de Kock appear as he made a quickfire 83 which helped the South Africans reach the target. Van der Dussen likewise hit his fourth fifty of this series to complete the innings with 10 overs to spare.

Prior, Pakistan made 240/8 subsequent to being sent in to bat at Newlands. Pakistan were on course for a major total on this pitch, as Fakhar Zaman hit a forceful 70. Be that as it may, the scoring rate hindered after his expulsion, with just 49 runs scored in the following 15 overs. Imad Wasim, batting at number eight, gave the innings late impulse, hitting 47 not out off 31 balls, but it was not enough to overcome the Proteas.

A disciplined combined bowling effort, a blitz from Quinton de Kock, and a cool pair of half-centuries from Faf du Plessis and Rassie van der Dussen were enough to seal the series for South Africa in the fifth ODI against Pakistan.#SAvPAK REPORT ?
… pic.twitter.com/1GxQgYtQqm

South Africa coast to 3-2 series victory courtesy of a whirlwing 83 runs off 58 deliveries by Quinton de Kock! Pakistan, having several chances of sealing the series, (having South Africa 80-5 in the 2nd ODI, and after posting 317 in the 3rd) will rue missed opportunities #SAvPAK