These are the first six matches of Match Day 3 of 38. The highlights are appended below the points table.

Match 1 of 10: Wolves vs Manchester City 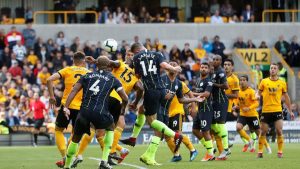 Rúben Neves first half by numbers vs. Manchester City:

Half Time: Wolves have seriously had a go at Manchester City and the visitors look quite rattled. Will the Citizens drop their first points of the season today? #BeAWinner pic.twitter.com/Ru1Q6YjPmr

“It does not take away from City’s excellence, but we want the season to go to the last. I would like someone to get a little bit closer to Manchester City.”

Martin Atkinson delivering for his boss!

Manchester united fans how they watching the second half. #BHAMUN pic.twitter.com/L1slFZztWL

Great effort by Wolverhampton to grab a point against Manchester City. Looked dangerous in the second half, and defended well in the last 10 minutes to hold on. Big point for Wolves, 1-1 draw #WOLMCI #PremierLeague #PLonNBC

Match 2 of 10: Southampton vs Leicester City 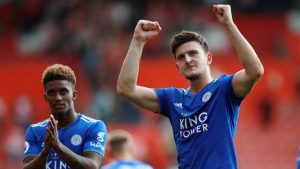 Saints played well and took the lead early in the 2nd half through Bertrand but Gray equalised moments later. Home side reduced to 10 men + Maguire stole the win in injury time. 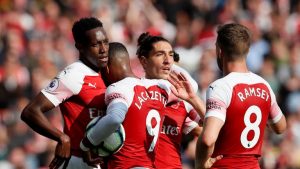 THE FIRST THREE POINTS: Goals from Danny Welbeck, Nacho Monreal and an own goal from Issa Diop gave Unai Emery his first victory as manager of #AFC in a 3-1 win over #WHUFC.

The Hammers start the season with three straight losses. pic.twitter.com/geDQFjq3ib

#Arsenal registered the first win of the season today!#BTS is killing it everywhere with their album #LoveYourselfAnswer and their #LoveYourselfTour
Don’t know a thing about #KSIvsLogan but I still want to know who wins haha

For the next three matches, go to the next page!

Football – Coppa Italia: Atlanta Knocks Out Juventus With A Humiliating...