The foundation of Premier league was kept in the 1990’s and it’s first season took place in 1992-93. Slowly but steadily, this league strengthened its position in the football world. Its popularity grew at a constant rate and at present, Premier League has established itself as one of the most watched leagues in the world.

Overall, only four clubs have dominated this league namely Manchester United, Chelsea, Arsenal and Manchester City. United has been the most successful one with 13 titles to its name from a total of 26 seasons so far.

In the last season i.e. Premier League 2017-18, Manchester City were the strongest team and deservedly won the league. This year they will be the defending champions and are most likely to win again due to their balanced squad. 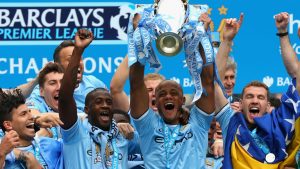 The season is scheduled to start from August 11 and as usual, a total of 20 clubs will participate in this league.

The full schedule of the Premier League along with the team names is given below:

For the schedule of further matches, move on the next page!