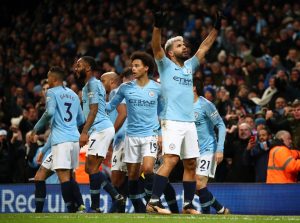 Manchester City hand Liverpool their first league loss of the season and sit only 4 points back in the Premier League table. pic.twitter.com/odXk7bO8S9

Manchester City are the first team to beat Liverpool in the Premier League this season.

The champions get their revenge. pic.twitter.com/NQ0dEQ0yeA

? Is a league-#UCL double a goer for either side? pic.twitter.com/xeR6d68gFg

Liverpool are no longer unbeaten❌

Goals from Aguero and Sane were enough to hand Pep and Manchester City three points, closing the gap to Liverpool to just four points. What does this mean for the #PL title race? ???????#MCILIV pic.twitter.com/a4K0K4aBD8

That has got to be up there as one of the most satisfying victories in recent times ! Quality @ManCity handing those deluded bin dippers the first defeat in the prem !!! So fucking happy !!! #mcfc #mancity #mci #mciliv #GameOn #Epl #PremierLeague pic.twitter.com/LlZfU0owDY