Immediately feeling the energy of the crowd, Roger Federer took a look around and he entered the stadium court at the Miami Open.

Federer advanced to the fourth round at Key Biscayne on Monday, beating Juan Martin del Potro 6-3, 6-4.  Federer, who was facing del Potro for the first time since 2013, never lost serve and improved to 15-1 this year. 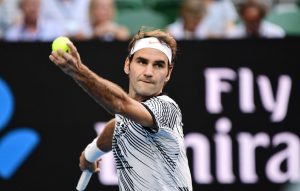 He broke del Potro twice, once in each set, and that was all he needed.

”It was really a great, nice atmosphere,” Federer said. ”It was a lot of pleasure playing in nice weather, great opponent, great crowd. What else do you need?”

The Argentine had a chance to turn things around when he had a break point when down 4-3 in the second set but Federer, moving well and looking full of confidence, held firm and wrapped up the match in one hour and 22 minutes.