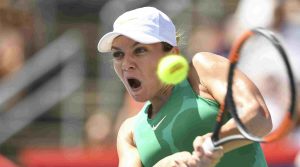 MONTREAL, Canada – Simona Halep progressed to her third Rogers Cup final after beating Ashleigh Barty by 6-4, 6-1 in the semi-finals of the ongoing Rogers Cup 2018.

Simona Halep is a Romanian national and professional tennis player. She is the current World No. 1 in the Women’s Singles tennis rankings, a position she initially accomplished in October 2017.

The Roland Garros final is also the Montreal final.

Going head to head against the 22-year-old Australian, Halep won four of the initial five games. However, the Aussie pulled nearer to the Romanian with her first, and solitary, break of serve in the sixth set, and held it for the length of the set to stay in touch.

And, in spite of the fact that Barty landed 71 percent of her first serves in the match, the World No.1 made her compensation when she was compelled to hit a second serve in the opening set, going 7-for-10 on those particular points.

The second set started in comparative fashion for the French Open 2018 champion, as she won the initial four games, and finally won two more to land her place in the Final.

Sloane Stephens into the Montreal final with a solid 6-3, 6-3 win over defending champ Elina Svitolina.

Will face Simona Halep in a Roland Garros rematch.

As at the French Open, Simona Halep doesn’t care for unfair scheduling.

These boots are made for walkin’, and that’s just what they’ll do.

Dream Final for the #CoupeRogers my favorite female tennis player @Simona_Halep against 1 of my other favorites in @SloaneStephens a rematch of the French Open! I gotta root for Simona sorry Sloane but it’ll be a great Final and will be happy for either of them to win! #RogersCup