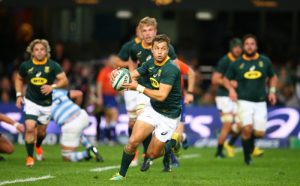 South Africa showed signs of improvement of Scotland for a 6th straight win after an exciting match at Murrayfield.

The Springboks drove 20-17 after a throbbing first half, amid which Jesse Kriel smashed through and Handre Pollard likewise scored.

Center Peter Horne completed off an epic Scotland move and Hamish Watson waltzed over after a smart line-out call.

A great little break by Embrose Papier. followed by a bit of magic from Steven Kitshoff taken on by Jesse Kriel gets the Boks their 1st try! Handre pollard converts.
Boks leads 0-7 (7min)#SCOvRSA #PaleToe #Springboks pic.twitter.com/9G1aXDWxDn

After the break Willie Le Roux was sin-binned for a purposeful thump on, yet Scotland neglected to exploit.

South Africa’s capacity and breakdown nous enabled them to rise up out of the 10 minutes a man down with their important lead flawless as Pollard and Greig Laidlaw exchanged punishments.

Handré Pollard take a bow, great performance, great player, has more than enough potential to become the world’s number 1 fly half (that’s if he isn’t already). Congrats to the @Springboks on winning an epic match, was never going to be easy at Murrayfield #SCOvRSA #ssrugby

In a wounding last quarter, Finn Russell put a long-run drop-goal only wide, before Elton Jantjies nailed a long-range penalty to extend the prompt six.

Furthermore, the Springboks held out stunningly to incur an uncommon home annihilation on Scotland and their second in three fall Test matches.