These are the last 4 matches of La Liga, Match Day 3 of 38. The highlights are appended below the points table.

Match 6 of 9: Levante vs Valencia 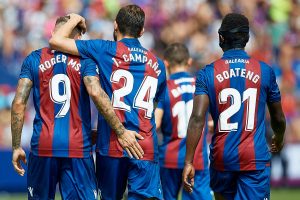 I’m kinda taking note of Lavante this season, they have been in one way or the other superb, playing well and making it very tough for their opponents. Despite playing a man down against Valencia, the match ended in a 2-2 draw.

Waiting for lift-off ?… Valencia are still looking for their first Liga win this season after three games following a 2-2 draw at Levante.#UCL pic.twitter.com/24l6dm00Jg

Match 7 of 9: Alaves vs Espanyol 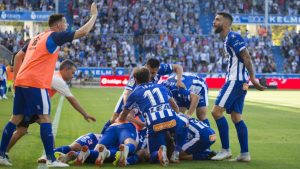 I think the results balance out for Betis. Deserved a win vs. Alavés and only really deserved a point here. Fair start to the campaign even if there needs some improving.

There are games where variations will be needed. We would moan if we controlled the midfield and scraped a win. Exploit opponents weakness, and that’s what this team does. Takes today and alaves, that was controlled as needed, but today was no need.

Match 8 of 9: Barcelona vs Huesca 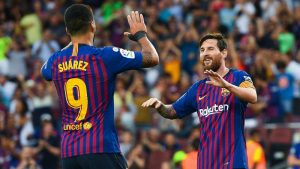 Coutinho made his 25th appearance for Barcelona in their 1-0 win over Real Valladolid last Saturday, meaning the club must pay the first installment of £4.4M to Liverpool.
[Mirror]

Fc Barcelona has sufficiently made “Match Win” so basic to me. I mean can we lose a match at least for once, I just wanna see something. #BarcaHuesca

Ronaldo (ex-Barça and Madrid) “The favorites to win the Champions League are the same: Real Madrid and Barça. This competition is very difficult, you need to know how to play it well. I believe we could have surprises from the English teams.” #UCL [omnisport]

Barcelona respected Messi and gave him his deserved improved new contract. Barca have Messi. That is why they are better than Madrid, will beat Madrid in both clasicos, and win La liga. Florentino “clown” Perez disrespected Ronaldo and Ronaldo asked to leave. Madrid are 2nd best. pic.twitter.com/Vi5ytZQP7e

Match 9 of 9: Real Betis vs Sevilla 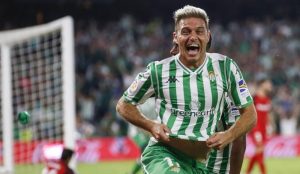 Real Betis win the first derby, in 12 years, at Villamarín. Joaquín with the winner in the 80th minute. The beautiful game on display today with the Seville Derby. https://t.co/LeH40eIbxK