This is the first match of LaLiga, Match Day 7 of 38. The highlights are appended below the points table.

Match 1 of 10: Rayo Vallecano vs Espanyol 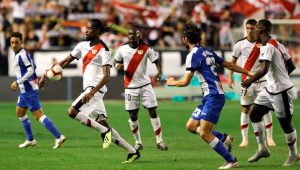 Entertaining 2-2 at the Vallecas as #Rayo were better in the second half. We also had a wee VAR at the death, which by all accounts earned #Rayo a point as the penalty award was over turned #RayoEspanyol