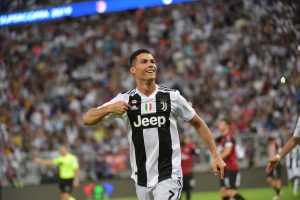 Juventus have won the Supercoppa Italiana for a record 8th time ? pic.twitter.com/vwe2vQhwgQ

Cristiano Ronaldo for Juventus so far:

– Most goals and assists for Juventus.

– Wins them the Italian Super Cup with his goal being the winner.

It is a “no brainer” Juventus will always win in such an Italian game orchestrated by poor officiating. But Milan gave a good fight in it.

Not too many chances created by the Diavolo but few instances things were to change, Ref saw them differently. ? #Supercoppa #JuveMilan pic.twitter.com/O9fsoymKjA

#OnThisDay photo from the 1984 European Super Cup final.#Juventus vs #Liverpool.