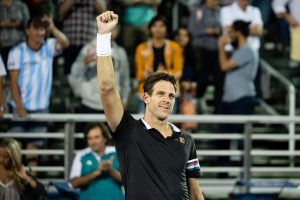 Juan Martin del Potro booked a spot in the Delray Beach Open quarter-finals, while Nick Kyrgios neglected to do as such on Thursday.

Del Potro, playing his first competition since October after knee damage, broke once in each set to beat Reilly Opelka 6-4 6-4 in the second round.

The Argentine best seed, champion at the ATP 250 occasion in 2011, next faces Mackenzie McDonald, who defeated Guillermo Garcia-Lopez 7-5 6-4.

Be that as it may, Kyrgios bowed out with a 6-2 3 6-3 misfortune to Radu Albot, who will meet Steve Johnson after the fourth seed’s 7-5 7-5 triumph over Paolo Lorenzi.

At the Rio Open, the remainder of the rest of the seeds – Joao Sousa – withdrew to leave the field wide open.

Sousa was beaten by qualifier Casper Ruud 6 3 6-4 in the second round to end up the remainder of the eight seeds to exit.

Tennis – Open 13: Stefanos Tsitsipas Cruises Through The Opening Round

Ruud will confront Laslo Djere, who was unreasonably useful for Taro Daniel 6-4 6-2 to add to his steamed win over Dominic Thiem.

And just like that. Round 2 is a wrap! @delpotrojuan defeated @ReillyOpelka in straight sets 6-4 6-4 at the @DelrayBeachOpen tonight. He plays @mackiemacster next in the quarter finals tomorrow. Stay tuned! pic.twitter.com/YiKuxyFKif