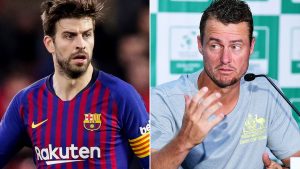 Lleyton Hewitt has depicted changes to the Davis Cup as “ridiculous” in a blistering critique of Gerard Pique lining his organization’s connection up with the challenge.

The 2019 highlights a singular Finals competition including 18 groups held in more than a week in Madrid in November.

Hewitt said: “I don’t agree at all with it. Having the finals in one place is ridiculous,”

“I personally don’t think all the top players will play but we will wait and see.

“If you look at Davis Cup the last couple of years the elite players are playing.

“The quarter-final last year between Germany and Spain — Nadal was playing — and I have played in massive ties at home and away but for me the most disappointing thing is guys like these — Bolty and Alex — (Alex Bolt and Alex de Minaur) will never get to play a Davis Cup final in Australia and that was one of the biggest joys I had in my career.”

A year ago’s four semi-finalists and two wild card groups – Great Britain and Argentina – are now certain of a place in the finals, however Australia must beat Bosnia-Herzegovina in one of 12 qualifiers this end of the week to seal their spot in Madrid.

Those changes, and the expulsion of five-set matches for three-set issues, have irritated Hewitt, who took a dig at Pique.

Roger Federer has likewise been critical and recommended he may now not take part in the occasion, and Hewitt trusts the expulsion of home and away ties for the finals will prompt a greater amount of the top tennis stars doing likewise.

Australia captain Lleyton Hewitt has hit out at former Barcelona star Gerard Pique and criticised the new format for the Davis Cup.

Round 11 of Lleyton Hewitt criticising the #DavisCup overhaul. He pulls no punches as he throws a couple of combination insults at Gerard Pique. Will the footballer hit back with a counterpunch? https://t.co/vSoBlsdeS4