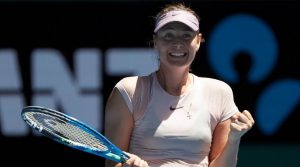 TIANJIN, China: Maria Sharapova announced on Monday that she is putting an end to her 2018 WTA season, withdrawing from the China Open in Beijing, the Tianjin Open, and the Kremlin Cup in Moscow due to injury.

Sharapova, ranked World No.24, was the defending champion at Tianjin.

“I was looking forward to coming back to Tianjin to defend my title but unfortunately I need to give myself time to recover from injury,” Sharapova told Tianjin organizers in a statement. “I am disappointed that I won’t be able to play in front of all of the fans in Tianjin again and I hope to be able to play there in the future.

“I wish everyone at the tournament a successful five-year anniversary.”

The Russian player posted a solid clay season earlier in the year, reaching semifinals at the BNL Internazionale d’Italia in Rome and reaching the quarterfinals at Roland Garros and the Madrid Open.

But she struggled physically on the grass and hard courts, withdrawing from the Nature Valley Classic in Birmingham and suffering a first-round loss at Wimbledon, and later withdrawing from the Mubadala Silicon Valley Classic in San Jose and Western & Southern Open in Cincinnati during the North American hardcourt summer, where she reached the third round at the Rogers Cup in Montreal and fourth round at the US Open.

Sharapova is aiming to start her 2019 season at the Shenzhen Open.