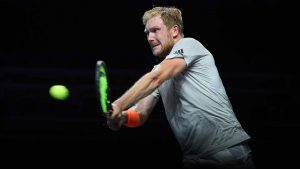 Matthias Bachinger played the match of his life to reach his first ATP World Tour final at the Moselle Open on Saturday.

The 31-year-old German rallied from the brink of defeat to upset top seed Kei Nishikori in the Metz semi-finals, securing a 2-6, 6-4, 7-5 win. More than two and a half years after undergoing knee surgery, the veteran has shocked the field to reach his maiden tour-level title match.

Wow! @MatthiasBachi had won just one #ATPWorldTour match in 2018 prior to this week.

“This has been my biggest success in my career. Kei is such a great player. I was a bit tired from yesterday but he also played really well in the opening set,” Bachinger said. “I kept fighting and I was able to hold my serve in the following and capitalized on my own break point chances. I tried to stay aggressive on the court, which was key.”

Bachinger registered just his second win over a Top 20 opponent in the ATP Rankings, overcoming 52 winners to edge Nishikori after two hours and 11 minutes. After forcing a decider with a rifled backhand return down the line, Bachinger came up clutch with his back against the wall at 3-4 0/40 in the third set. He would reel off five straight points to hold and later broke for the match with Nishikori serving to force a third-set tie-break.

Matthias Bachinger, No. 166 in the #ATP Rankings, had lost twice to Kei Nishikori this year before their @MoselleOpen semi-final.

After springing an upset Saturday, the ?? is into his maiden tour-level final ?.

Nishikori had previously earned a pair of victories over Bachinger in 2018, with their lone FedEx ATP Head2Head encounter coming at the Gerry Weber Open in Halle. Earlier in the year, the German became the only player to take a set off the Japanese star at the ATP Challenger Tour event in Dallas, as Nishikori blasted to the title.

But Saturday was Bachinger’s chance for revenge and he didn’t let slip the opportunity. For the second straight year, a German qualifier will bid for his maiden ATP World Tour title in Metz, following Peter Gojowczyk’s stunning run to the crown in 2017. Bachinger has won six matches in seven days this week. Entering the tournament at World No. 166, the former No. 85 is guaranteed to rise more than 30 spots as he pushes towards a Top 100 return.

A stunner at the @MoselleOpen!

World No. 166 Matthias Bachinger shocks top seed Kei Nishikori in three sets to reach his maiden #ATP final at the age of 31. ?

“Conditions here suit my game of playing, as the balls don’t bounce that high. I had a good feeling right from the beginning of the week,” Bachinger said. “However, I didn’t expect to reach the final. I am very happy.”

Bachinger will look to lift his maiden title against an opponent who knows a thing or two about triumphing in Metz. He next faces two-time champion Gilles Simon, who cruised past Moldova’s Radu Albot 6-3, 6-1 in 78 minutes.

Entering the week, Simon had lost five of his previous six matches. But he has won three of his four matches at this Moselle Open in straight sets, breaking Albot six times on Saturday without facing a break point himself.

This year’s Pune titlist will look to continue a French tradition of sorts, as Frenchmen have triumphed at this event in nine of 15 editions, including seven of the past nine. Before lifting the trophy in India at the start of 2018, Simon had not been victorious since Marseille in 2015. Now, the 33-year-old has an opportunity to win two titles in a season for the first time since 2011. He has beaten Bachinger in both of their FedEx ATP Head2Head matches, with their most recent meeting coming in Bucharest six years ago.