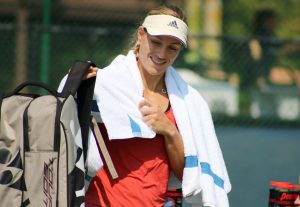 Fourth seed and previous champ Angelique Kerber overcame a 2nd  set wobble against Sweden’s Johanna Larsson to make it to the US Open Round of 32.

The German, who had never lost a set in three past matches with Larsson, won the match by 6-2 5-7 6-4. She was on the ropes amid her intense second-round fight against Johanna Larsson, requiring a tiring two hours and 20 minutes to proceed onward at the US Open.

Unbelievable last 20 minutes from Angelique Kerber, who quickly loses 5 consecutive games from 6-2, *5-2 up to lose the 2nd set… #USOpen

You will always have ups and downs in your life and your career, but just stay positive and go for it. – Angelique Kerber @ Uncle Julio’s https://t.co/SMiJ7oCtYv

Angelique Kerber survives. The No.4 seed defeats Johanna Larsson 62 57 64 to move into 3R to play Dominika Cibulkova. AK looked absolutely gassed in the final set but battles through. #USOpen

In the third round, Kerber will confront another huge test as she goes up against No.29 seed Dominika Cibulkova in her next match. Cibulkova edged past an extreme three-setter of her own against Hsieh Su-Wei, 7-6(3), 4-6, 6-4.

Their experience will be a rematch of the 2016 BNP Paribas WTA Finals Singapore displayed by SC Global last, where Cibulkova brought down Kerber 6-3, 6-4 to lift the title.