On a blustery night in Munich, Germany won back some respect with a solid attacking execution in their first game, after their disappointing World Cup exit in Russia.

The French appeared to nurture a post-World Cup aftereffect, without their standard speed and inventiveness. And, if it was not for Areola’s key saves in the second half, the scoreline would have been different.

Strangely, the Germans began with 4 focal defenders and with Joshua Kimmich changing from right back to a holding midfield position. This was a clear move by mentor Joachim Low, who aimed to strike a superior harmony amongst assault and defense, than his team had done in Russia. 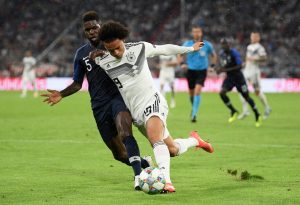 1 Germany and France battle to Nations League draw: World champions France are held to a goalless draw against Germany in League A of Uefa’s Nations League. 1 https://t.co/qZwW9F3VtB

Neither one of the sides were anxious to take risky chances, with a possibility to score coming off from both teams in the 1st half; a blocked Olivier Giroud header for France and the Germany forward Timo Werner’s low shot.

Germany goalkeeper Manuel Neuer did well to spare a Griezmann exertion simply past the hour. However, it was Areola who made the recoveries of the day, first punching Marco Reus’ short proximity exertion wide. 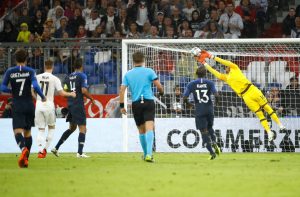 The 25-year-old, got the chance to feature in the starting XI, in light of the fact that Lloris and second-choice Steve Mandanda were injured. He denied Mats Hummels, tipped a Thomas Muller chip over the crossbar and ceased Matthias Ginter from scoring from short proximity.

Areola’s 6 recoveries were the most by any French goalkeeper in 54 matches of any official tournament since 2012.

Plenty of big names on show but it was debutant Alphonse Areola who stole the show as Germany and World Cup winners France played out a goalless draw in Munich. #NationsLeague pic.twitter.com/MK6QQUobQ8

Benjamin Pavard came away from France’s 0-0 draw with Germany with a few scars! ?