Allsportspk presents to you the first half of men’s and women’s singles of Wimbledon Open 2018. 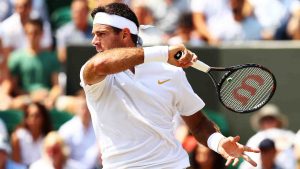 Juan Martin del Potro books his place in the second week at #Wimbledon with another three-set victory, defeating Benoit Paire 6-4, 7-6(4), 6-3.

Could the ?? lift his second Grand Slam ? next week? pic.twitter.com/5LYzcge7GR 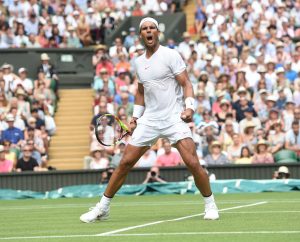 The tweener lob, executed with perfection by @RafaelNadal…@HSBC_Sport Play of the Day is outrageous ? pic.twitter.com/G48cMnI0c0

Marching on into the fourth round, @RafaelNadal triumphs 6-1, 6-2, 6-4 against Alex de Minaur on Centre Court#Wimbledon pic.twitter.com/zaMuV4csk8

Q. The draw, you and Roger, scheduled to meet in the final if you go through. Is that a match you would like to happen again?

RAFAEL NADAL: If I am in the final, I prefer to face an easier opponent. I am not stupid (smiling).

Day 6 of #Wimbledon2018 and a quiet day on the outside courts today…. a nice celebration, Fabio Fognini losing his #raquet, taking a rest and punching his #raquet #tennis #photography pic.twitter.com/FEJb3SJWsD

#93 Jiri Vesely wins in four sets over #19 Fabio Fognini to reach the second week of #Wimbledon for the second time.

Will the former junior No. 1 be able to challenge World No. 1 Rafael Nadal on Monday? ? #Wimbledon pic.twitter.com/bHZwMQehyM

Matthew Ebden is through to the 3rd round of a grand slam for the very first time, at #Wimbledon!

Gael Monfils and Gilles Simon:
Both saw their ranking plummet in 2017. Both missed Davis Cup final win. Both started 2018 with title run. Both lost Australian Open 2R. Both reached Roland Garros 3R. Both now into Wimbledon 4R. If they reach QF they’ll be ?? #1 & #2 in the race.

Gilles Simon sets up 4th round match against Del Potro after beating Ebden 6-1 6-7 6-3 7-6. Pretty great performance from the Frenchman, only real blip was serving for the match at 5-4. Doesn’t always have the power, but he can do so many things on a tennis court. #Wimbledon