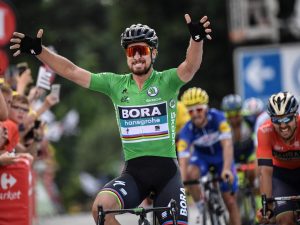 Sagan Peter retained his top rank in the Men’s Cycling rankings, with Chris Froome and Elia Viviani placed at the 2nd and 3rd position respectively. Also, Matej Mohoric, who recently won the Binckbank Tour upgraded his rank to the 28th position.

Matej Mohoric ? from Team Bahrain-Merida took out an impressive overall victory in the 2018 BinckBank Tour, part of the UCI World Tour ? #UCIWT

Check out a selection of photos ? from across the seven stages ? https://t.co/ZWmEABD2vJ pic.twitter.com/MX62kuVNMR

Another upgrade was of Gilbert Phillippe who is now placed at the 34th position. Some of the other significant upgrades were of Michael matthews, Matteo Trentin and Niki Terpstra, who are now placed at 13th, 15th and 21st position respectively.

Italy retained it top spot in the Men’s Nationwise cycling rankings, followed by Belgium and France who are placed at 2nd and 3rd position respectively.

Some of the significant upgrades in this category were of Austria, USA and Belarus who are now placed at 18th, 21st and 28th position respectively.