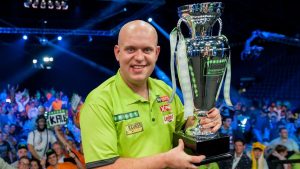 Michael van Gerwen overall winnings came down, however he is still placed at the top of the Men’s PDC Darts rankings. Meanwhile, Daryl Gurney replaced Gary Anderson to take the 4th position in this category.

Some of the other significant upgrades were of Raymond van Barneveld and Joe Cullen who are now placed at the 11th and 16th position respectively.