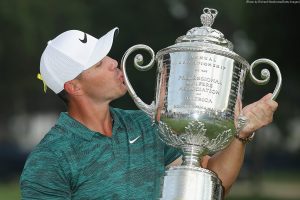 Brooks Koepka won the PGA Championship 2018 and jumped two ranks up to the 2nd position. Dustin Johnson could not make it to the top three in the tournament, however he did retain his top position in this category.

He becomes the 3rd player with multiple major victories at 15-under or better. Koepka also won the 2017 U.S. Open at 16-under.

The other two golfers to accomplish this feat? Tiger Woods with 6 such victories and Rory McIlroy with 3. pic.twitter.com/6ToJg1eQAC

Meanwhile, Tiger Woods who came 2nd in the event, upgraded his rank from 50 to 26. Some of the other significant upgrades were of Marc Leishman, Bryson DeChambeaue and Tyrrell Hatton who are now placed at 17th, 21st and 23rd place respectively.