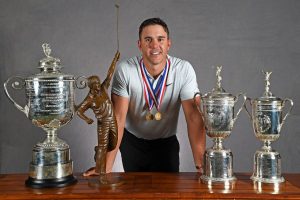 Brooks Koepka retained his top position, while Justin Rose jumped to the 2nd position by replacing the former World No.1 golfer, Dustin Johnson. Meanwhile, the winner of WGC-HSB Champions Schauffele jumped from the 19th to the 12th position.

RT @PGATOUR: “That’s been engraved in him forever, to be tough.” @XSchauffele has proven in his brief pro career that he performs best when the stakes are highest. https://t.co/mwcvdFpRLm

Bryson DeChambeau also jumped a singular rank and is now placed at the 6th position. Some of the other significant upgrades were of Tommy Fleetwood, Tony Finau and Pantrick Cantray who are now placed at the 11th, 15th and 23rd position respectively.