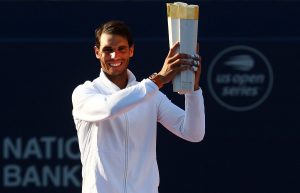 Rafael Nadal won the Rogers Cup 2018, and extended his lead as the World No.1 tennis player in Men’s Singles tennis rankings. The runner up of the tournament, Stefanos Tsitsipas also jumped from 27th to 15th place.

Juan Martin Del Potro also upgraded his rank by replacing Alexander Zverev for the 3rd position in this category. Other significant changes were of Lucas Pouille, Marco Cecchinato and Richard Gasquet who are now placed at 17th, 22nd and 26th place respectively.

Test Cricket Records: Players Who Barely Missed Out On A Triple...