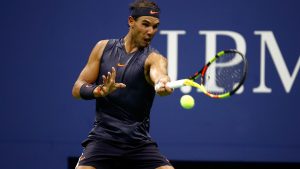 Rafael Nadal retained his top position in the Men’s singles tennis rankings with Roger Federer and Novak Djokovic placed at the 2nd and 3rd place respectively. Meanwhile, Nikoloz Basilashvili defeated the World No.4, Juan Martin Del Potro to jump 11 ranks up to the 23rd position.

The ?? wins three straight games to stun Juan Martin del Potro 6-4, 6-4 and capture his second ? of the season in Beijing. pic.twitter.com/Gz4R4QVExV

Some of the other significant upgrades were of Kevin Anderson, Kyle Edmund and Lucas Pouille who are now placed at 8th, 14th and 18th place respectively.