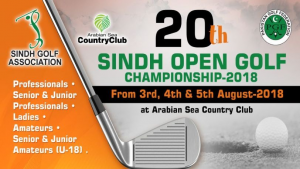 At the end of the first round of the professionals section, in this three rounds 20th Jubilee Sindh Open Golf Championship in progress at the par 72, Karachi Arabian Sea Country Club Golf Course.

The first round belonged to six champions of the national golf circuit who are bunched together as leaders at a score of gross 68, four under par. Anser Mehmood of MGGC is one and others are Shahid Javed Khan (Lahore Gymkhana), M.Ashfaq (Airmen Golf Club),M. Qasim (DHA), M. Munir (Islamabad) and M. Afzal (SRC). Interestingly just one stroke behind at a score of gross 69 is the eminent and consistency loaded performer, Matloob Ahmed of Garrison Golf Club and the seasoned Tahir Nasim of Lahore Gymkhana.

During the 18 holes, these six champions were models of excellence, performing to perfection and looking awesome in every aspect of the game, which included power packed hitting off the tees, accurate approach shots to the greens and total control of the putter.

The competitors numbered 96 and out of the other champions seeking prized positions, those who look good and capable of making a charge are Atiq ur Rehman (KGC), Latif Rafiq (Gymkhana) and M. Nazir (Islamabad). These three managed an impressive score of gross 70, two under par and seem determined to edge past the leaders of the first round over the remaining two rounds. A few more who played well are Hashmat Khan (DHA), M. Tariq (Islamabad), Waheed Baloch (KGC) and Ahmed Saeed (KGC) and ended up the first round at a score of gross 71.

Some champions who could not stand out on the first day are Shabbir Iqbal and Hamza Amin and hope to push their positions up the leader board with better performances.