What further enlivened the proceedings was the fact that Matloob succeeded in eliminating the overnight one stroke deficit and then birding holes 5 and 8 and levelling with the champion Shabbir Iqbal at the end of first nine holes. A tormenting aspect of the fierce competition was that the other challenger Hamza Amin, from whom much was expected, could not recover from the unexpected happening on the 9th hole. Hamza hit his shot into the water and then as per rules took another shot and as if to inflict unbearable pain, this shot too went into the water and so did another one. This disastrous episode resulted in loss of five strokes and for him the race to the championship title was over.

From thereon it was a battle between Shabbir and Matloob. And as the proceedings moved on, the victory tilt started to move in Matloobs favour as Shabbir lost a stroke on the 11th hole while Matloob by virtue of admirable hitting secured two birdies on holes 12 and 13. From thereon every shot was cheered by the huge crowd but Matloob did not relent till the last moment and after getting a par on the closing 18th hole he surfaced as the Punjab Open Champion for 2018. That he prevailed over the star player, Shabbir Iqbal by one stroke only is not of any relevance. For this experienced one of the Pakistan Golf scene, securing the title by prevailing over Shabbir is of much significance. 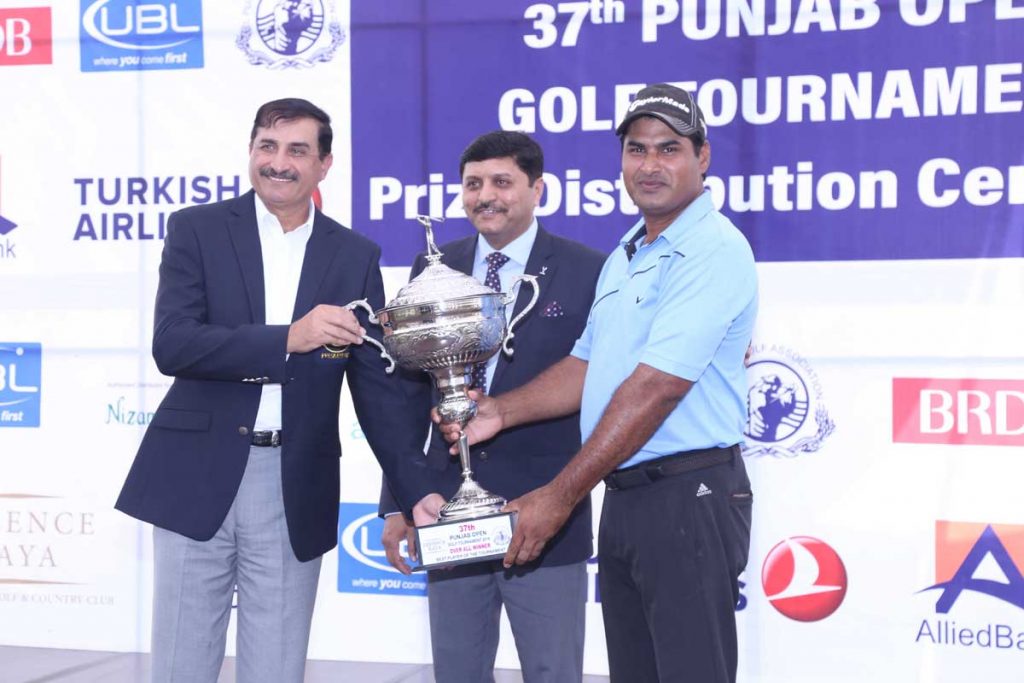 The Punjab Open lived up to its reputation of being one the best organized events of the Pakistan Golf calendar. The championship also catered for the amateurs, who amongst themselves tried to keep up the environment of competition and did look functional on a most challenging golf course. Taimur Khan (Peshawar) with an aggregate score of 228 managed to win first gross. Robin Bagh of Gymkhana acquired second gross position. His score was 232. Ghazanfar Mehmood of Garden City came third with a score of 233. In the race for net honours, Danish Javed (NTDC, WAPDA) played brilliantly to come first in net section with a net score of 220. Khawaja Ahsan secured second net followed by Jamal Nasir, third net.

At the conclusion of the 37th Punjab Open Golf Championship, the prizes were given to the ladies by Mrs General M. Hilal Hussain and to the other performers by Lt Gen Hilal, President Pakistan Golf Federation and Brig. Muhammed Sajid Khokhar, Administrator, DHA.