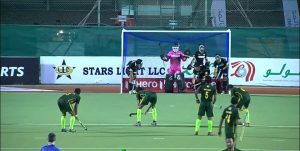 In their fourth match of the round robin phase, Pakistan drew with Japan 1-1 at the Hero Asian Champions Trophy Hockey Tournament at the Sultan Qaboos Sports Complex in Muscat, Oman.

Japan, recently won the Asian Games gold for the first time, defeating Pakistan in the semifinals. In fact, in the last five meetings against Pakistan before this match, the Japanese led three to one with one draw.

In the first half, Pakistan had more of the possession, circle entries and chances. Tight marking in the circle by Japanese denied them. But Japan took the lead in the 11th minute. A swift right side move with neat passes resulted in Kitozato availing a return pass in the circle from a good spot. Going behind, Pakistan made more meaningful attacks and equalised with the first penalty corner of the tie in the 25th minute. Mubashar Ali whipped the ball into the board left side of the goal keeper. In the dying moments of the first half, Attique Arshad’s fine close range attempt was well saved by the net minder.

Pace slowed down in the third quarter and it was mainly a mid field show. Pakistan wasted their second PC. Japan held the upper hand during the last 15 minutes when they had three penalty corners and a field attempt coming off the post.

Pakistan now have two wins, one defeat and one draw.

Play their last round robin fixture against Malaysia on Thursday.