Cheers Lee. Was great to catch up and see a tired #BartyParty get over the line. Just had enough left in the tank. Very impressed though with the French “Queen”:@Oceanedodin going to damage some major draws real soon…???#allez 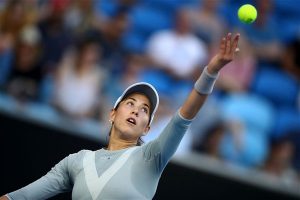 See. Garbiñe Muguruza’s not cute. She’s a ? hear her roar. ?

No problems for Wimbledon champ Garbine Muguruza, who wins 6-1 6-2 against Anastasia Pavlyuchenkova

Kristýna Plíšková in action during her unfortunate match against Daria Kasatkina in Birmingham today @Deneliza75 pic.twitter.com/yjnXa0xzXj

Coach Philippe Dehaes cheers on Daria Kasatkina on her way to a three-set win in Birmingham pic.twitter.com/zXSfmJCQBW

Big comeback win for Daria Kasatkina to defeat Kristyna Pliskova 36 75 64 in 1h53m. Very good match between the two, who combined for 66 winners. #NatureValleyClassic

Petra Kvitova with a great play here at the Nature Valley Classic in Birmingham! ???

Another long but great day for @MikiBuzarnescu. Today in R1 in Birmingham she faced a tough opponent in Timea Babos, but was able to get the win in 3 sets to move on. Mihaela defeated Babos 6-3, 4-6, 6-0.#NatureValleyClassic pic.twitter.com/MGhxqiICzA

In demand: @juliagoerges taking selfies with fans after her Birmingham R1 win pic.twitter.com/qcLYtyflSZ

@elise_mertens it’s a shame how this broad choked today.

Join allsportspk to see the highlights of the 5th day of Birmingham Classic 2018.