Petra #Kvitova up a 6-3 set against Mihaela #Buzarnescu, and has just gone up a break in the second.

The latter’s rapid rankings rise has been impressive, but hard to see Kvitova losing this if she continues to channel her aggression. #NatureValleyClassic pic.twitter.com/9ijT4QcdBo

Petra Kvitova is into her 5th final of the season. Defeats Buzarnescu 63 62 to extend her Birmingham win-streak to 9. Has not lost a set all week.

It’s a grass-courter’s final on Sunday:

Sealed with an ace!@Petra_Kvitova will defend her #NatureValleyClassic title tomorrow against Rybarikova. 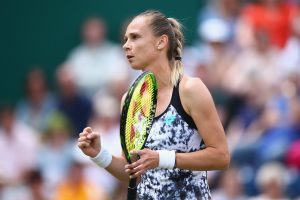 Magdalena #Rybarikova takes a 7-6(1) lead over Barbora #Strycova in the #NatureValleyClassic SFs.

First set Strycova has dropped since her opener. Shanked a couple of shots in her final return game, and Rybarikova was steadier by far in the tiebreak. Approached the net a lot. pic.twitter.com/AT4ZnSwPyG

Defending champ Petra Kvitova is back into the Birmingham final, beating Mihaela Buzarnescu 6-3, 6-2 in the semis.

Magdalena Rybarikova is the first finalist at the Nature Valley Classic in Birmingham! Here is a quality point she played earlier in the week against Mladenovic! ???

Congrats on making it to the final today @elise_mertens & Demi Schuurs! I’ve been watching your matches all week as a volunteer of the tournament and you’ve played amazingly! So all I want to say is good luck for tomorrow! I’ll be the one clapping the most for you ??

Serving to sat in the match the Czech duo of Katerina Siniakova and Barobora Krehcikova. The floral pattern is a bold choice that looks like a mid 90s Prem so trailblazing style as well as flair here #NatureValleyClassic pic.twitter.com/PLC8pH4Xa2

Powerful ground strokes from both partners and solid net defence but the French/hugarian combo edging it so far pic.twitter.com/J1l7KSmbhB

Fans and @wta players love a selfie ? at the #NatureValleyClassic!

Join allsportspk to see the highlights of the final day of Birmingham Classic 2018.