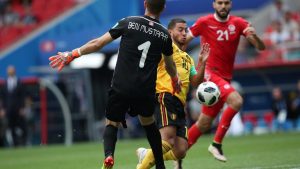 GOAL!#BEL is awarded a penalty & Eden Hazard buries it! 1-0 for the Red Devils! #WorldCup pic.twitter.com/5njPnjT3vc

GOAL ⚽ A feather like touch from @hazardeden10 sets him up for his 2nd!

Eden Hazard converts a penalty for #BEL for his first World Cup goal, the 13th penalty awarded at this World Cup.

It also means there have been 27 #WorldCup matches without a 0-0 draw, the most matches into the tournament without one all time. pic.twitter.com/T2WMDkVuTf

Eden Hazard teaching ur Goat how to take penalties pic.twitter.com/VfyPTlZWDe

Stat: Lukaku is the first player to score 2 or more goals in consecutive World Cup games since Diego Maradona in 1986 (England & Belgium). Some jug-eared goal-hanger also managed that feat in 86.

Romelu Lukaku is such a quality finisher. Four goals in one and a half games for #BEL. Definitely a contender for the Golden Boot. Natural finishing instincts.

Michy Batshuayi could legitimately have a hat trick in the 15 minutes he’s been on for. So unlucky to not even have one goal.

Confident and clinical penalty by Carlitos to give #ElTri the 1-0 lead! What a moment for him! #VamosMexico #LAFC ??????#KORMEX #MEX pic.twitter.com/8atdKkjlF9 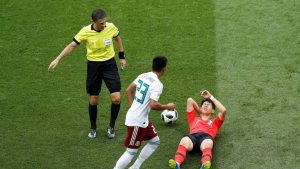 Listen, even if you don’t like soccer, you need to appreciate the beauty of Carlos Vela. pic.twitter.com/NUwzNXzoYV

The World Cup is an incredible emotion ??pic.twitter.com/7RBMPiIg91

Love the passion of the #MEX fans. Brilliant goal from Javier Hernández – Mexico’s all-time goalscorer with 50 goals. Will be great to see them in the knockout rounds. Richly deserved.

Hueng Min Son crying after meeting the President after today’s loss has made me sad beyond words. ???? pic.twitter.com/oI3JqRUYaj

What a goal that was … Ola Toivonen #GERSWE #WorldCup pic.twitter.com/T3TQB1XAK0 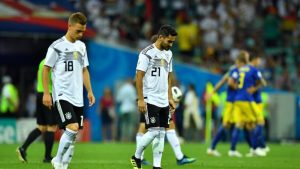 Marco Reus gets the equalizer for Germany! pic.twitter.com/BftyKBARYD

GOAL #SWE! Ola Toivonen chips Neuer and the Swedes take a shock lead. As it stands, the defending champions are out of the #WorldCup!#GERSWE

“Of course the first goal is down to me. No question. […] But you’ve then got to have the balls to play like that in the second half.”

Toni Kroos on German TV after giving the ball away for the first goal and going on to score the winner. pic.twitter.com/AFjH6oCq8j

When Toni kroos finally scores yet you had just tore your betslip #WorldCup #GERSWE pic.twitter.com/Yi3tXZ6tZT

A magnificent match. A pleasure to cover it. Absolutely delighted for Toni Kroos, who gets a true symbolic moment that his brilliance deserves. So often the server of superb set pieces in the past he serves one up himself to power the Germans to a massive victory.

Ola Toivonen scored zero goals for Toulouse this season in Ligue 1. He might’ve just scored the goal that advances #SWE to the round of 16 and knocks out #GER. #IloveThisGame

34 – Marco Reus’ equaliser was Germany’s first goal of the 2018 World Cup, with what was their 34th shot in this year’s tournament. Breakthrough. #GERSWE #GER #WorldCup pic.twitter.com/GVNuQx6kuC