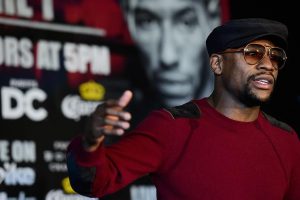 Subsequent to marking an arrangement with a mixed martial arts company, the infamous boxer Floyd Mayweather will battle kickboxer Tenshin Nasukawa in Japan on 31 December.

This is not an April’s Fool Prank, this is legit real.

Recently, the boxer has spoken about his his potential upcoming battles with the boxer Manny Pacquiao and UFC’s undefeated Khabib Nurmagomedov who has record of 27-0.

The configuration and standards for his battle with Nasukawa are up in the air.

“I can wrestle a little bit. I can box a lot. I can do anything if I set my mind to it.”

Floyd Mayweather will be fighting an undefeated kickboxer in a RIZIN event on New Year’s Eve ?

The rules for the match, however, have yet to be finalised… pic.twitter.com/SIlObqOpFe

The kickboxer who will face the boxer is none other than Japan’s Nasukawa. The fighter is 20 years old and is currently signed with the organization Mayweather has marked with, which is the RIZIN Figthting Federation.

New Year’s Eve @FloydMayweather -v- Kickboxer from Japan!
This could be a stepping stone to a return fight with @TheNotoriousMMA ?
A certain Coach said he would do a River Dance naked if this happened ? pic.twitter.com/1Y0oy6fHAZ