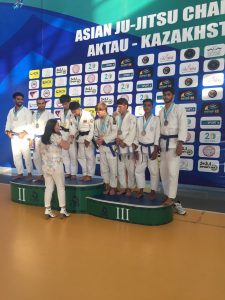 Pakistan Ju-Jitsu players won 2 bronze medals in the Asian Ju-Jitsu Championship 2018 that was held in Bangkok from 11-15 July 2018.

Dilawar Khan Sannan and Muhammad Ali Rasheed were the players who showed their excellence in Duo Show And Duo Classic categories.

According to official of PJJF under the duo system this was first time that the team participate in Asian championship. The team members were: